Since 1989, Paladin Press has brought you some of the best instruction in real-world self-defense available on video, showcasing experts in disciplines ranging from classical karate to down-and-dirty street fighting. Now, we’ve gone one better.

In one landmark video production, Paladin has gathered three of our best-selling video authors: veteran cop and martial artist Loren Christensen, boxing and grappling specialist Mark Hatmaker, and Vince Morris, kyusho-jitsu expert and founder of the Kissaki-Kai style of karate. The assignment: to teach you the best defenses they could muster against common street attacks, including a haymaker punch, a front kick, a tackle, a rear choke, a side headlock, and a lapel grab and punch. Drawing from their personal fighting styles and training

A COMPARATIVE ANALYSIS OF SELF-DEFENSE TECHNIQUE 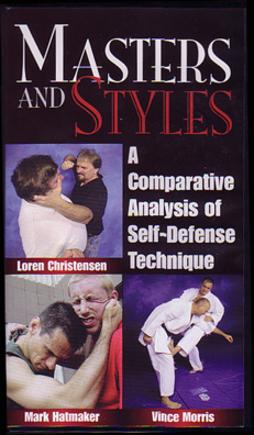 backgrounds, these experts present their solutions to these same attacks, giving you a unique opportunity to compare and contrast not only their techniques but their teaching styles and fighting philosophies.

This is the ultimate "greatest hits" video and a rare opportunity to compare and contrast martial arts masters and their styles. For information purposes only. Videotapes and DVDs are nonreturnable; defective tapes and disks will be replaced. Color, approx. 60 min.

Includes the special feature The "Reel" Deal: A Preview of the Paladin Press Video Library. This 30-minute video features previews of our hottest video titles and shows you why we are the industry’s leading producer of cutting-edge videos on martial arts, self-defense, combat shooting, sniping, personal freedom and other hard-hitting topics. Packed with footage of best-selling authors like Kelly McCann and Joseph Simonet, this video also provides a rare glimpse at the dynamic history of Paladin’s video production efforts and is destined to become a collector’s item. This outstanding opportunity to "try before you buy.

Loren W. Christensen began his law enforcement career in 1967 when he served in the army as a military policeman in the United States and in Vietnam. He joined the Portland, Oregon, Police Bureau in 1972 and retired in 1997. During those years, he specialized in street gangs, defensive tactics, dignitary protection, and patrolling the bizarre streets of skid row. Loren began his martial arts training in 1965 and over the years he has earned 11 black belts, 8 in karate, 2 in jujitsu, 1 in arnis. As an author of of over 50 books, Christensen has received high praise for his easy-to-read, informative writing style.

Mark Hatmaker is a lifelong student of the martial arts with more than 24 years of experience in Western boxing, wrestling and no-holds-barred fighting. Known as "the Professor of Grappling," he is widely recognized for his pragmatic, results-oriented approach to combat training. Hatmaker conducts regular seminars across the country and can be visited at his Web site: www.extremeselfprotection.com.

Vince Morris is a world-renown expert in kyusho-jitsu (the Okinawan/Japanese version of dim-mak) and the founder of the Kissaki-Kai branch of karate. He also has years of experience adapting the most functional elements of his karate style to the needs of law enforcement officers and security personnel and has taught these specialized skills to government agencies all over the world.

This title is available only on Amazon and at Paladin-press.com