The only way to truly understand warfare across the ages is to recognize and appreciate man’s limitations. Looking at it from a physiological and psychological point of view, suddenly everything begins to make sense.

The chariot. The Roman way of battle. The phalanx. Posturing. The power of leaders. Spray-n-pray. How and why early and nearly useless gunpowder weapons ruled the battlefield. Suddenly it all becomes clear. 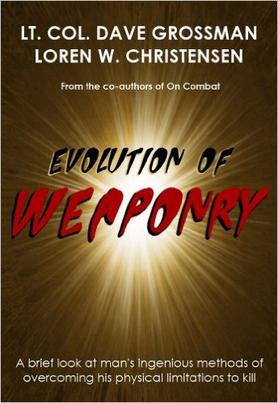 Kindle ebook only. Available on Amazon

Lt. Col. Dave Grossman and Loren W. Christensen best selling authors of On Killing, On Combat, Warrior Mindset, and many others, present Evolution of Weaponry, a powerful and deeply insightful book for any student of history, psychology, or the casual reader who desires a deeper understanding of the human condition.

Includes a first-person narrative by a soldier who fought in the battle of Wanat in Afghanistan, considered by many to be the deadliest battle fought by US troops there.