The Psychological Cost of Learning to Kill in War and Society

What makes soldiers kill--or not--animates this intriguing survey by a psychologist and former U.S. Army officer. Col. Grossman reveals that only a fraction of soldiers kill during warfare (and feel revulsion when they do); the rest (about 85 percent in World War II) resist by missing the target or refusing to fire.

With an eye to the military command's imperative of overcoming that innate resistance, Col. Grossman quotes numerous anecdotes that exemplify the phenomenon and studies that examine it.

With such knowledge, the military has implemented training that gets firing rates up to 90 percent of soldiers [as we saw in Vietnam],

"...well written on a subject that has never before, to my knowledge,been drafted for public consumption."
General W.C. Westmoreland

"...an explosive look at why there is so much killing not just in wars but in modern society...it is a must read. I recommend it highly. His research...is frightening, and should be a wake-up call to society. I couldn't put it down."
Walt Gochenour, WWII vet, in 82nd Airborne Division Association Journal

"...both disturbing and oddly reassuring ... a valuable contribution, full of arresting observations and insights of the sort that make you alter the way you have thought about certain subjects, most notably the nature of battle and the dramatic rise in the murder rate that has taken place in the United States in the last two decades. "powerful...persuasive...incisive... "Grossman's case is too carefully presented, too well grounded in actual observations, not to be taken seriously."
New York Times

"...illuminating account of how soldiers learn to kill and how they live with the experience of having killed...This book concludes with an impassioned plea for regulating media violence through social censure and pressure. This surely, is a sensible and welcome recommendation."
Washington Post

"On Killing is destined to become a classic."
Army (Journal of the Association of the U.S Army)

"I enjoyed (if that is the right word to use) On Killing enormously, congratulations on a fine piece of work."
Richard Holmes, author of Acts of War and Sandhurst History Professor

​​but the psychic cost of blazing away for real is heavy. Individually, a killer goes through thrill-remorse-rationalization stages; socially, the killer needs reassurance and if it is not received, will suffer post-traumatic stress syndrome, characteristic of Vietnam veterans.

Col. Grossman concludes his findings of "enabling factors" in killing by identifying them at work in the rampant violence afflicting American society. This is a book that requires some steely fortitude to finish, but once done, On Killing delivers insights on human nature that are both gratifying and repelling. 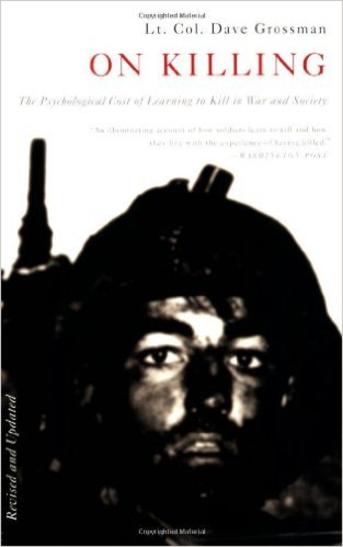