​A STREET COP'S WALK ON THE WILD SIDE

In it, the horror, humor, and heartache of life on skid row come alive in vivid anecdotes that reveal a subculture few people know or understand.

With honesty, flair and knee-slapping laughs, Christensen offers a rare curbside glimpse into the gritty urban world of skid row. In so doing, he captures a bit of Americana that is quickly disappearing as the flophouses, filthy taverns, and pawnshops are pushed out to make room for art studios, coffee houses and quaint eateries. In this colorful tribute to the cops who have worked skid row as well as the characters who have lived there, Christensen preserves for all time that place where, for decades, man's inhumanity to man revealed itself in a million sordid stories.

What readers are saying about SKID ROW BEAT

"I laughed my butt off."
"I was offended, then I laughed, then I was enraged."
"Some of those stories are absolutely gross."
"Every time I tried to put it down I'd say, 'Just one more. I have to read one just one more story.' "
"Powerful! Moving!"
"Christensen doesn't pull any punches."

Only $19.95 plus postage and handling

"When I first joined the Portland PD, skid row was a Wild West show nearly as insane as Saigon, where I had just spent a year. Its wine-soaked streets were teeming with drunks, dopers, jackrollers, pimps, crazies, fighters, and killers, all mixed and crammed into a filthy 12-square- block area where violence was an hourly event and death loomed nearly every bloody night."
- Loren W. Christensen

That lurid scene formed the backdrop for the place Officer Loren Christensen called "work" off and on for five years of his 29 years in law enforcement. That experience, as well as those of fellow officers who spent more than 20 years walking a beat on skid row, left him brimming with endless stories, the best of which are included in this book. 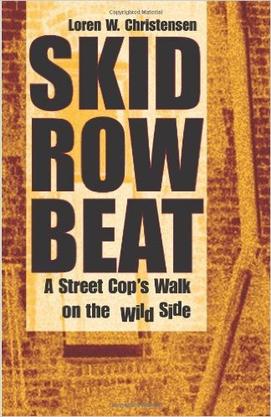