Have you ever disarmed a knife wielding attacker? Looked down the barrel of a gun? Been attacked by two or three thugs at the same time? Carjacked? Sucker-punched? Clubbed? Loren W. Christensen and Mark Mireles have. With over 50 years of law enforcement experience between them, they've been on the receiving end of nearly every kind of street attack imaginable and witnessed countless more assaults.

In Total Defense: A Comparison of Grappling and Striking Defenses Against Common Street Attacks, they share the knowledge, skills and techniques you'll need to prevail during a physical attack. You'll learn the best striking and grappling defenses against sucker punches, grabs, 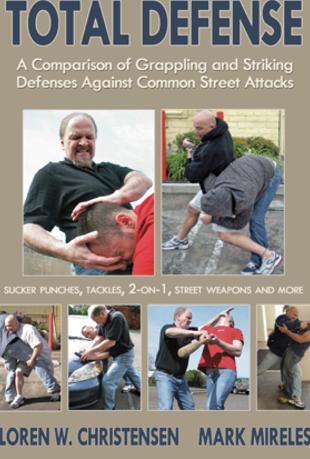 Total Defense is like getting two books in one: for each type of attack, Mark shows you how to lock-up, throw or takedown your assailant while Loren shows you how to punch, kick, rip, gouge, stomp or crush your attacker's most vulnerable targets.