cologne and hair gel waits to replace him.

There’s the by-the-book way of policing, and there’s Boss’s way. His works, but the changing police department and the newly formed Internal Affairs Division don’t like his old-school methods.

Things are about to turn ugly on skid row. No problem. Boss can handle it.

Loren W. Christensen patrolled Portland, Oregon’s skid row in 1972 as a rookie and again from 1983 to 1988. Boss is a composite of the veteran officers who worked the row in the 70s, men who cared about the down-and-outers when no one else did.

Some of the skid row characters in Boss are composites, while others are depicted as they were, though the names have been changed.

Most of the incidents in the book are based on actual occurrences.

"Loren's characters are so real because, as it turns out, they were real."

"I love this series."

"Christensen can write street grit, violence, and humor all in the same paragraph."

Books purchased at LWC Books are signed by the author. You can also purchase the short stories of Boss individually on Amazon as well as the Paperback omnibus edition.

For most of his 26-year police career, Officer Bossman, “Boss,” has walked a foot beat on skid row, 12 square blocks of hell some cops call “a place forgotten by God and city hall.” Boss loves the down-and-outers on the row; he considers it his honor and his calling to protect them from the bloody violence that erupts every day on the rundown streets.

Joining the PD right after fighting in WWII, Boss skated through the easy-going 1950s, barely survived the tumultuous 1960s, and now in the early 1970s, at a time when he is a true master of his realm, the ticking clock is moving him toward retirement as a new breed of cop with c 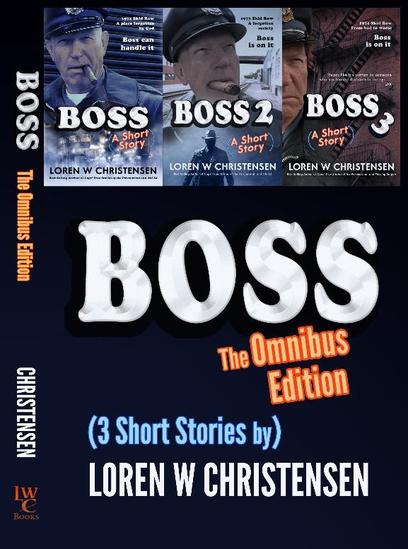